The 31-year-old lawyer, gorgeous, uncharacteristrially down-to-earth for the Bachelor and seriously has her shit together. Honestly, I’d love to be her when I grow up.

While her and Nick have chemistry on the current season, it became clear that while they did share spark, but it was mostly coming off of her. She’s vibrant, definitely there for the right reasons and has arms that would make Michelle Obama put on a sweater.

ABC usually holds off until after the Bachelor finale to announce the new Bachelorette. Instead, they broke tradition and made the announcement with Jimmy Kimmel on Monday, so if you missed it and live in NYC you’ll probably see it the next time you take a cab. This announcement came as a surprise considering Rachel is still dating Nick on the show.

Choosing a black bachelorette is a huge step for the franchise, but hopefully this change doesn’t result in next season’s Bachelorette being orange.

The announcement is usually after the Bachelor finale, so I thought I had a few more weeks to get my draft picks in order.

Much like Celebrity Apprentice and Worst Cooks in America, reality show seasons featuring celebrities seem a little more special. So let’s just say that if Rachel walks away from the role, I have celebrities in mind who are perfect to take over. They agreed to it already and everything.

Back in 2012, Klohe married Lamar Odom after just 30 days together. At the very least, we need not worry about her struggling with the idea of getting engaged after only six weeks of filming.

Per her request, her season would be the first to feature a cast of entirely black guys. The hybrid Bachelorette-Kardashian season means we won’t need Chris Harrison to tell us this will be the Bachelorette’s most dramatic season yet.

Like Klohe K, Tiffany’s family has a penchant with drama and reality shows, making her a perfect fit for The Bachelorette. Since Donald may not live in the White House himself, maybe the Bachelor mansion can be given a season off in favor of filming in D.C. Would it be too weird if the fantasy suite is booked at Washington’s new Trump Hotel?
If the season does not go well, producers can always swap in Arnold Schwarzenegger’s daughter. I hear she’s a huge rating machine.

The openly bisexual star would be the first to have both men and women competing for her affection on the show. If she is single by the time casting begins, there is no human that wouldn’t scramble to audition for her season.Just don’t expect her to take the winner’s name – her’s is already trademarked. 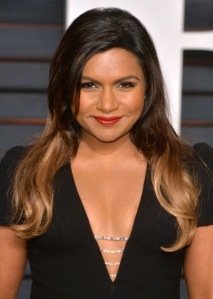 One of the most acclaimed aspects of Nick’s season so far is the increased diversity of the cast. Two of the front runners, Danielle L. and new Bachelorette Rachel, both have minority backgrounds and have been two of the most popular contestant with fans.

Bachelor Nation warming up to the more diverse cast paves the way for a more body positive bachelorette. Who more fitting than Mindy? Finding the humor in being single and curvy is a huge part of Mindy Kaling’s brand, so watching her find love will be as entertaining as it would be a cultural milestone. 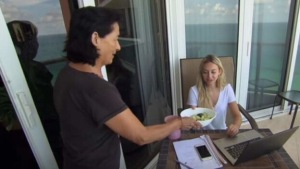 Okay okay, she might not be a “celebrity” but has a kickstarter in her name, so that is famous enough for me. Besides, what makes a woman more of a catch than mastering a cheese pasta recipe and cutting cucumber slices like a Ninja? Nanny Raquel (left) can keep this season’s most high-maintenance contestant happy, she deserves her own series, let alone a season. Between preparing Corinne’s bed and meals, giving 25 men attention equal would be easier than taking candy from a baby, as opposed to just serving it to one.

Raquel is shown in footage from next week’s Hometown episode preview. Do you think Raquel makes cheese pasta or cut vegetables to help lock down Nick for Corinne? Would Nick just move in with Corinne’s family? Could Nick give the rose to Raquel? I have so many questions and not enough patience to get to next week for this.